Cupertino looks like many other small, drab cities in northern California, with serried houses and shopping centres. Later this year, however, it will become the only place to find Apple’s newest creation: the enormous ring which will serve as the technology firm’s headquarters (rendering pictured above). Several months before he died in 2011, Steve Jobs, Apple’s founder and the mastermind of the project, predicted that the spaceship-like structure would become “the best office building in the world” and that people from everywhere would travel to see it.

To prove Jobs right, around 13,000 construction workers have laboured for years behind thick, high walls. The site spans several city blocks. Earlier this year, everything was hidden from view except cranes and a huge sand pile that rose a few hundred feet high, like the Great Pyramid of Giza. The scale of the project rivals the ancient Egyptians’ monuments. Every piece of glass on the four-storey exterior is curved, requiring special panes to be made in Germany – the largest pieces of curved glass ever manufactured. With a price tag of around $5 billion, it may be the most expensive corporate headquarters in history.
Jobs’s last public appearance was at a meeting of Cupertino’s city council at which he requested approval for the project. The building, which is designed by Norman Foster, a British architect, is both an ostentatious expression of Apple’s wealth and an elegant shrine to Jobs’s vision. Huge swathes of green space will sit within and outside the circular building, recalling the lush orchards that blossomed in the area when Jobs was a child. Jonathan Ive, Apple’s chief designer, who helped craft the iPod and iPhone, has overseen the particulars with the painstaking rigour he applies to refining all the firm’s new gadgets.
“Silicon Valley is having its Versailles moment,” says Louise Mozingo, a professor at the University of California, Berkeley, and the author of a fine book called “Pastoral Capitalism” about corporate headquarters. Last year Facebook opened a new, 430,000-square-foot building in Menlo Park designed to embody the company’s informal culture. Resembling a giant warehouse, it is reputedly the largest open-plan office in the world. Meanwhile, Google is working on a zany idea for a new headquarters to replace its Googleplex, which involves constructing movable glass buildings. Other technology companies, including Nvidia, Samsung and Uber, will, collectively, spend well over $1 billion on new buildings that broadcast their success. These ambitious projects will transform a bland architectural landscape of generic-looking office parks. But they also mark a cultural shift for the Valley, whose ethos is to value garages (in which firms like Hewlett-Packard and Apple were born) over glitz.
Of all the projects in Silicon Valley, Apple’s is the grandest and – although it might not initially look it – the most traditional. In selecting Foster, who designed the futuristic-looking Wembley Stadium in London, Apple opted for a sleek, modern aesthetic. The building, which resembles a giant version of the button on an iPhone, will be as elegant and thoughtfully packaged as one of the company’s products. It will also be a bit sterile, like Apple’s minimalist stores. Random visitors will not be welcome on campus, and will be able to see it only from the observation deck of a separate building – fitting for a firm that is notoriously secretive. 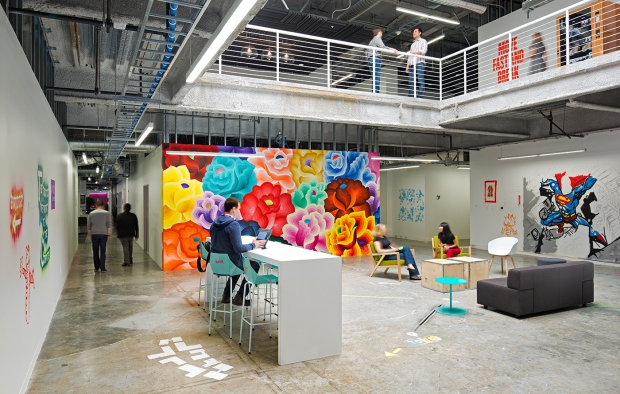 While Apple is aiming to build an architectural icon, Facebook is trying to do the opposite. Although the firm used Frank Gehry, the American starchitect responsible for the undulating Guggenheim Museum in Bilbao, Facebook executives go to great lengths to insist that the project was neither expensive nor lavish, like a hipster who buys designer jeans but tries to look as though he’s just got out of bed. “It’s an efficient structure. There’s nothing fancy about it,” says Lori Goler, Facebook’s vice-president of human resources. John Tenanes, who oversees real estate for the social network, calls it “unarchitecture”. It is “just a really simple, straightforward, practical building that promotes a very productive work environment”, he says. The price of Building 20, as it is called, has not been disclosed.
In some ways the Facebook executives are right. Building 20 is split from the rest of the Facebook campus by Highway 84; from the road, the long glass structure is unremarkable. The layout is straightforward: parking is underground, employees all work on the main level and outdoor space is on the roof. No one – not even Mark Zuckerberg – has his own office, although the top dogs do have conference rooms reserved for them. Facebook has made its fortune connecting people, and its open-plan layout, in theory, gives employees more opportunities to meet each other and interact. Though rich enough to hire one of the world’s most famous architects, Facebook is hesitant to let go of its start-up past. Its ambivalence about its power is reflected in signs of choreographed carelessness throughout the building. Exposed beams and electrical wiring make it look like an aircraft hangar crossed with a garage. Facebook relishes this look, and is willing to pay for it. When, in 2011, the company moved into buildings once occupied by Sun Microsystems, it ripped out the ceilings in order better to capture a scrappy, start-up vibe.
Google’s plans are the most audacious – on brand for a firm working on imaginative projects like exploring space, extending human life and creating a self-driving car. As it continues to grow quickly in profits and headcount, Google has decided it wants to devise new ways to make its headquarters expandable. The company has hired two architects, Thomas Heatherwick and Bjarke Ingels, who have come up with an idea that feels as though it was concocted at an all-night party at Burning Man, the annual gathering of hippies and techies in the Nevada desert. Their plan is to construct a mobile set of glass buildings that would expand and shift like Lego blocks as different departments’ space requirements changed. A specially designed crane will be needed to rearrange the structures. The proposal suggests that Google, having disrupted many industries, now wants to rethink a central tenet of architecture: that buildings are immovable.
These firms’ visions for what they want to erect may differ, but they share common elements. They are designing functional, open-plan offices to increase collaboration among employees: “activity-based” working, which involves people doing their jobs from different places within an office, including outdoor benches, on-site coffee shops, napping pods and meeting rooms, is becoming the norm. They are also softening the buildings – and the whiff of corporate might – with greenery. Apple is using renewable energy to power its spaceship and is planting 9,000 trees. At nine acres, the roof garden on top of Facebook’s Building 20 feels vast. There is a juice bar and food carts, and sprinkled throughout it are map legends, designed to look like those consulted by backpackers in a state park.
But while this wave of construction captures the optimism and wealth of a cohort of companies that are imagining and packaging our digital future, Silicon Valley could lose something in the long term. The Valley thrived because people met and shared ideas in office parks, restaurants and cafés, and talent has historically moved around easily within and between companies. As firms build self-enclosed universes, that mixing may stop. Innovative architecture may attract talent and tourists initially, but it also risks altering an environment that has fostered world-beating ideas and products. Cupertino and other Silicon Valley towns may come to long for the time when they had no interesting buildings to distinguish them.
Πηγή: https://www.1843magazine.com