It’s been a tough year for U.S. retailers, as stagnating wage growth and volatile market conditions have created uncertainty that is weighing on many consumers’ spending behaviors. There are, however, some positives heading into the holiday season: improving consumer confidence, lower gas prices and job gains, all of which should spur consumer spending, much of which will be led by multicultural consumers and large households.

THE ECONOMIC BACKDROP LEADING INTO THE 2014 HOLIDAY SEASON

Entering the fourth quarter of 2014, retail sales remained sluggish and weaker than they were this time last year. Consumer confidence in the U.S. has been trending upward; however, uncertainty persists, and many consumers still report feeling as though they are still in a recession. That uncertainty and a sluggish equity market could dampen spending this season. Spending over the next few weeks, however, should pick up for retailers, buoyed by positive trends in the job and housing markets, coupled with low fuel prices and lower inflation.

SO WHO’S ALREADY HITTING THE STORES?

Overall, Nielsen expects Americans to up their holiday spending by almost 2% this year, and 22% of us have already made the transition from thinking about the holidays to actually making purchases. When it comes to the battle of the sexes, women are in the lead in terms of jumping into the ring early. In fact, 27% of women say they’ve started their shopping, dwarfing the 12% of men who are in the same camp. And while many men and women say they plan to wait to shop, 10% of women and 18% of men say they’re not going to shop at all this year.

Households with young families are among those already shopping this year. Of the 22% of households that are already opening up their wallets and purses, 30% of them have five or more members, and 32% have children under the age of 12. Households with just one member and households with no kids each account for less than 20%.

While Nielsen expects relatively flat retail unit (-0.3%) sales this year, dollar sales should rise about 1.8%. When we look at what will drive the uptick, a good portion of the credit goes to multicultural households, as many consumers in this group say they plan to increase their online spending and in select offline channels like toys and consumer electronics. Overall, 10% of consumers say they plan to spend more this year than they did last year, and multicultural households account for 43% of the projected extra spending: 17% African-Americans; 13% Asian-Americans; 13% Hispanic. Additionally, fewer people plan to spend less than they did last year (21% vs. 23%, respectively).

HOW MUCH DO CONSUMERS PLAN TO SPEND FROM NOW THROUGH THE HOLIDAYS?

The majority of households (32%) plan to drop between $250 and $500—a common spending threshold for households earning both more and less than $50,000 (32% and 31%, respectively). More households earning over $50,000 are planning to spend between $500 and $1,000 than last year, while other projected spending levels are consistent with those from last year across all households.

In aggregate, 12% of households earning less than $50,000 say they plan to spend more than they did last year, compared with only 8% of households earning more than $50,000. When we look at the hot spending areas, online, toys and electronics are standouts, while gift cards remain the most popular holiday gift item (12% plan to spend more on gift cards this year) for what we will spend more on this season. As the channel that will see the biggest increase in shopping, online is rapidly becoming a space where more and more younger shoppers are finding what they need. Notably, 17% of Millennials plan to spend more online than last year, compared with 15% of Gen X, 12% of Baby Boomers and 7% of the Greatest Generation. 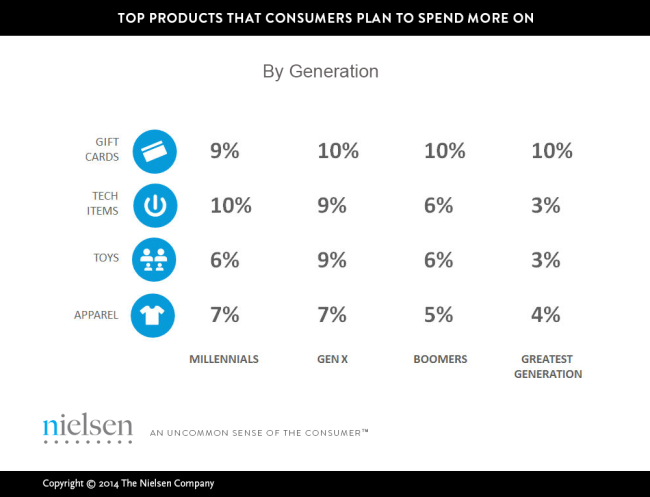 While online remains the top growth channel for holiday shopping, there are a few avenues that will have to work harder to attract shoppers and entice them to spend. For example, only 7% of consumers plan to spend more this year at dollar stores, down from 9% last year. Consumer plans for increased spending at mass merchandisers and club stores are also lower this year—but only in the context of their intentions last year. So while some channels will see less of an uptick, 10% of consumers plan to increase their spending at mass merchandisers, 5% plan to spend more at club stores, and 7% will boost their spending at dollar stores.