Jessica Alba, Arianna Huffington and Oprah Winfrey may be some of the most visible female entrepreneurs, but they aren’t the only ones worth celebrating this Women’s History Month. Over the past eight years, 38 percent of net new firms created in the U.S. economy have been owned by women, according to a report published by American Express OPEN and research/consultancy group Womenable. As of 2015, there were an estimated 9.4 million women-owned businesses in the United States, the report found, and those companies employed about 7.9 million people and generated nearly $1.5 trillion in revenues.

Female-run companies now account for 30 percent of all enterprises in the U.S., but that percentage can vary sharply depending on the industry. For example, just 7.4 percent of construction firms are owned by women, the study found. At the other end of the spectrum are health-care and social assistance companies, where women are more likely than men to run their own businesses. Companies involved in education are close behind, with nearly 45 percent of U.S. companies in that field owned by women. 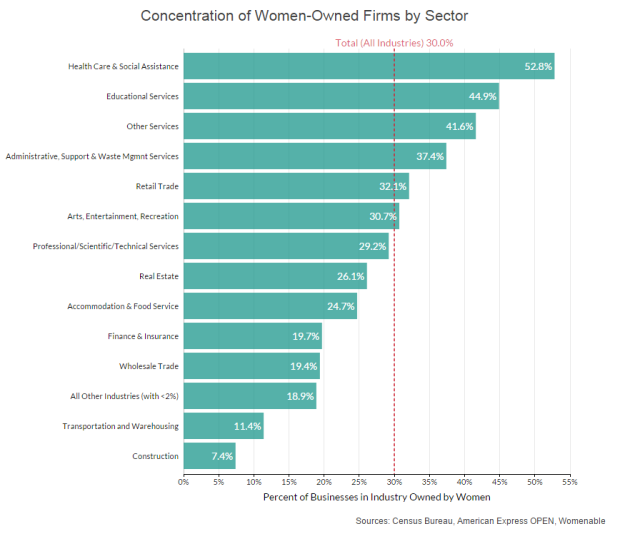 The concentration of women-owned businesses also depends on geography. That is, some cities in the U.S. create a better environment for women-owned businesses than neighboring metropolitan areas. “Location plays a key role in the success of any business but an even bigger one for women-owned firms,” according to a report by personal finance website WalletHub. “That’s because some areas are better than others at encouraging female entrepreneurship and recognizing its value.”
According to the report, which compared the 100 largest metropolitan statistical areas across key metrics indicating friendliness toward women-owned businesses, the best city is Nashville, Tennessee. The worst city for female-run businesses is San Jose/Santa Clara, California, according to the study, which ranked cities across three dimensions: 1) overall new-business friendliness, 2) female entrepreneurship and 3) business climate for women.